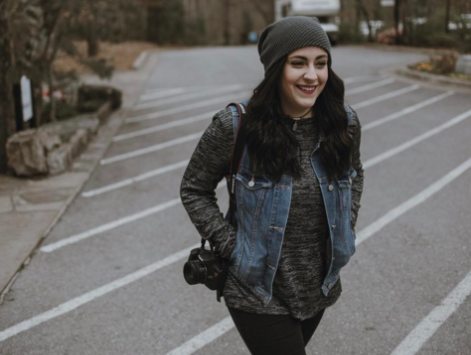 Students have grown to love hearing funny stories and interesting facts about their peers on “Humans of OBU,” an Instagram account run by a student, modeled after the famous “Humans of New York” account, which features different citizens of New York City and shares part of their story with the world.

“I can always count on this account to hear interesting stories or just get a good laugh,” said Austin Connolly, a sophomore engineering physics major from Rogers.

Marissa Pilcher, a senior mass communications and Spanish major from Little Rock, has been running the Instagram account for two years now.

“I think that people want to get to know people on their campus that maybe they aren’t friends with, but they see their faces,” Pilcher said.

During Pilcher’s sophomore year at Ouachita, another student named Hannah Pinkerton ran an Instagram account called “Humans of Ouachita.” The account was fairly successful, with a few hundred followers, but it slowed down after just a few posts. Fast forward to Pilcher’s junior year, when she was writing for the Online Signal. The staff wanted to continue this idea with a “Humans of Ouachita” weekly column, so they chose Pilcher for the job.

Only a week or two after she started working on this column, she approached the editor about moving this column to social media, where she thought it would have much more success. They liked the idea. Pilcher got the account information from Pinkerton and renamed it “Humans of OBU.” Within the first few weeks of posts, the account went from about 200 followers to about 800.

“I think it did really well right off the bat because I posted every day. I was very meticulous about meeting up with people to get their picture and talk to them,” Pilcher said.

She also started using a real camera instead of just an iPhone for pictures. The focus was on quality pictures as well as quality content. She wanted the stories to be funny or inspiring, not just “who is your favorite professor at Ouachita.”

Originally, Pilcher would have specific themes to run, and that is how she would pick who to feature. For example, the week of the International Food Festival, she would feature international students. She also did a series on couples who both work at Ouachita and a series on the redheads on campus.

Recently, Pilcher has just been picking people randomly. She believes that everyone has a story to tell, it’s just a matter of getting it out of them.

“If I have a hunch and I feel like they have an interesting story, I just go for it,” Pilcher said.

Pilcher loves this job, because it gives her the opportunity to get to talk to many different kinds of people and work on her social skills. She has learned about how to get someone to feel comfortable and share stories, because most people do not just naturally sit down and share anything and everything.

“I think that was a skill that I was interested in before, but it’s grown exponentially. I think in the real world, it’s going to help me because sometimes you have to talk to random people, and you have to be able to carry a conversation when it’s really awkward,” Pilcher said.

She has had to learn how to get people to quickly feel comfortable with her and open up to share embarrassing stories or life experiences.

She has had to learn to how love people and make them feel loved from the moment they sit down to talk to her. That is why she loves this job so much. She loves people and hearing the stories that they have to tell.

“I love people. It has very much grown my love of people,” Pilcher said.

Pilcher is currently looking for the next person to run the account, as she will be graduating in May.

Since she cares so much about all the work she has put into it, she is taking time to talk to different people to find someone with just the right qualities to take over next year.

The photography skills are important to the account, but she is mainly looking for someone who will love this account. It is her baby that she has poured so much time and energy into these past two years.

She does not have anyone picked out yet, but she will find just the right person to continue contributing to such a fun aspect of Ouachita.