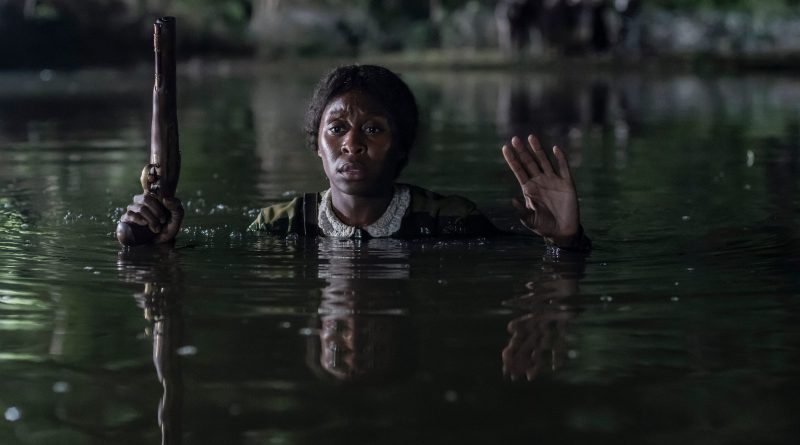 “Harriet”, directed by Kasi Lemmons, is an extraordinary film about the incredible Harriet ‘Minty’ Tubman’s (Cynthia Ervio) escape from slavery and her journey to becoming one of America’s greatest heroes.

The owner of the plantation Harriet was a slave on, Gideon Brodess (Joe Alwyn), was supposed to give Harriet and her family their freedom a long time ago, but refused, forcing them to stay and work. When Harriet escapes from the plantation, she must leave everything and everyone she loves, including her husband (Zackary Momoh). When Harriet gets to Philadelphia, William Still (Leslie Odom Jr.) and Marie Buchanon (Janelle Monáe) help Harriet start a life that is free from oppression. Despite protests from William and Marie, Harriet goes back to bring the rest of her family out of the opression of slavery. Thus, Harriet became a conductor on The Underground Railroad. The film will show the audience the dangers that Harriet faced while brining her people into freedom from their oppressors.

This film is outstanding! The cinematography is phenomenal. The use of ariel angles combined with running shots help create a solid film.

The historical context of this film is very accurate. This movie lines up with the history books for the most part. The songs that Harriet sings in the film to send messages to her people were songs used on plantations during this time, including “Hold On”, “Goodbye Song” and “Wade in the Water”. The film also shows how Harriet’s identity was a mystery in the south, being known as Moses. Alwyn’s character was fictional and created for conflict purposes.

The acting in this film is extraordinary. Ervio’s performance as Harriet brought the character to life in a way that people have never seen before. Alwyn’s acting shows the cruelty of plantation owners and the way of thinking in the south before the Civil War.

The underscore of this film helps immerse the audience into the history. The writing is so powerful that the audience will be kept on the edge of their seat till the credits begin to roll. Certain scenes are very intense and could cause the audience to hold their breath. Some characters throughout the film will make the audience question the history they believe to know everything about.

This film is absolutely remarkable. It’s masterpiece that tells an impressive story about an extraordinary woman who freed many slaves from their oppressors. History that everyone has heard about has been created into a film for the audience to visualize the life that Harriet had. This film shows how God used his power to protect and guide Harriet on the perilous journey to free many slaves.  While the film has some very intense scenes that may not be suitable for younger ages, I highly recommend this film for those who want to learn more about Harriet and The Underground Railroad. I absolutely loved getting to see the story of Harriet being brought to the big screen. I rate this film five out of five tiger paws.