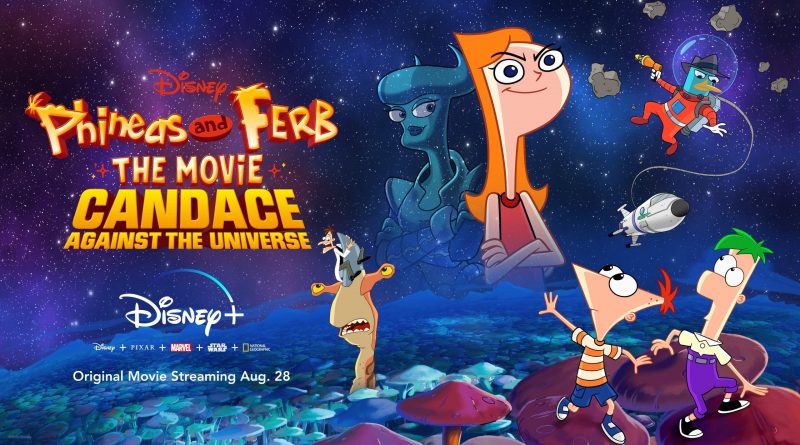 Five years after saying goodbye to Phineas (Vincent Martella) and Ferb (David Errigo, Jr.), we return to Danville and the Tri-State Area for “Phineas and Ferb the Movie: Candace Against the Universe.” After Candace (Ashley Tisdale) fails once again to bust her brothers, she and Vanessa (Olivia Olson) are abducted by aliens. Without the necessary tools to save Candace, Phineas and the whole gang turn to Dr. Doofenshmirtz (Dan Povenmire) and his “Galactic-Travel-Inator” to rescue them. Meanwhile, Agent Perry the Platypus (Dee Bradley Baker) has been given an assignment to protect the kids and save the girls all while keeping his identity a secret.

“Candace Against the Universe” has a really strong storyline. While it is a children’s movie, it has also aged well for those who watched the show “Phineas and Ferb” when it first released on Disney Channel. As an interesting twist, though, Candace is the main character of the movie and it tells the story from her perspective.

The writing tugs at the audience’s heartstrings and changes their perspective on the television show, making them want to rewatch the show. The story itself has other interesting plot twists that keep the audience guessing how the movie will end.

Throughout the film, new interactions create different dynamics within the original character group. For example, Isabella (Alyson Stoner) and Dr. Doofenshmirtz, who did not interact with each other during the show, spend most of the movie fighting over who will lead the group.

The songs in this film are also excellent. However, they do not quite reach the bar that was set by the show with songs like “Busted,” “S.I.M.P.” and “Platypus Controlling Me.” The music does create a tone to help submerge the audience into the film, though.

There are also more details in the characters in the movie than there were in the show thanks to advancements in animation. And the voice actors brought their characters to life and did a good job of making them seem like real people.

Going back to the Tri-State Area brings back amazing childhood memories. This movie does a great job of paying homage to the show with references throughout the entire film, some of which only die-hard “Phineas and Ferb” fans will notice.

“Anybody who’s a big fan of the show is going to get more out of the movie than if they’ve never seen it because there’s lots of little allusions and Easter eggs and references to the series,” Povenmire, who is also the show’s co-creator, said. “But it’s also just a bigger, more impactful story than they usually get with the same characters that they love.”

This movie is treated as a lost episode which takes place in the middle of the boys’ summer, but that has not been aired until now. With films that have had their production sent home due to COVID-19, Disney’s quality has remarkably stayed the same from studio to home.

I laughed so much throughout the entire film, and I highly recommend this movie for anyone who loves “Phineas and Ferb.” “Candace Against the Universe” is available to watch now exclusively on Disney+. The movie also includes a mid-credit scene that will bring a smile to people’s faces. I give this film four out of five tiger paws.