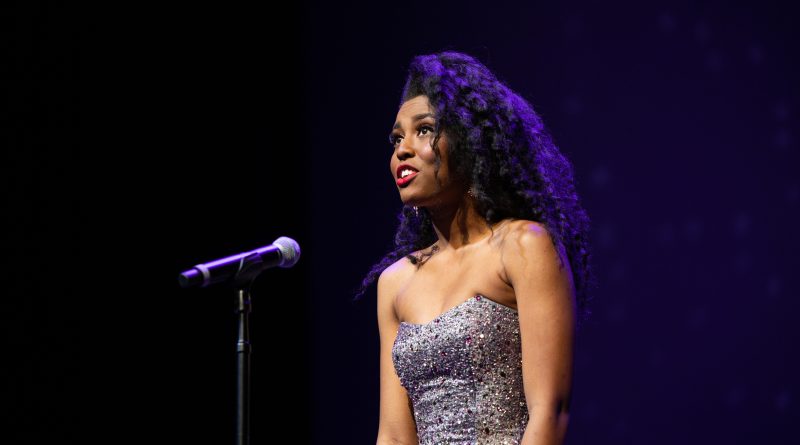 The mirror reflection showed every detail: the makeup, the hair products, the props and scripts. The candidates were rushing around in shimmering evening dresses while the costumes gleamed on their hangers. The mirror showed the nervous chatter and encouraging gestures, the relieved tears and laughter. From the make-up room to the stage, spirits were high in anticipation and excitement.

Upon the ending of the 53rd annual Miss OBU pageant, which was held on Feb. 1, junior theater major Bowa Asagba won the title of Miss Congeniality. Asagba advocated a stance for Attention Deficiency Hyperactivity Disorder (ADHD) awareness and performed a jazz routine.

“I’ve always wanted to do a pageant; they just looked captivating. I love how much work goes into showmanship. I love being on stage, but this was a completely different way of being on stage,” Asagba said. “With theater, you’re living authentically under imaginary circumstances but it’s not your authenticity necessarily. So I got to put who I was on a stage, which was something that I’ve always wanted to do.”

Asagba has loved theater from a young age and used this passion to fuel her performance.

“I started doing theatre in the eighth grade,” Asagba said. “It’s such a true community. One thing I’ve learned about theater is that no one really stays in it unless it’s some form of ‘home’ for them. So I found a home there and stuck with it ever since.”

Being involved in Tri Chi for nearly three years has provided her with a genuine support system that offers continual self-discovery and new relationships.

“Representing Tri Chi was so humbling, I was so proud. I wouldn’t have seen myself representing Tri Chi last year had someone told me, because I felt so invisible. I didn’t know how to reach out,” Asagba said. “It all started during Tunes. It was at first really awkward, but I got to be more vocal. This put me in a place where I was more visible, and I didn’t want to waste that. I wanted to put my foot forward and be proactive, and with every relationship it’s always a two way street. Had I chosen to be more quiet, I don’t think I could be in a place where I could be so obsessed with these girls. I’ve been able to be so comfortable with my exact self.”

Asagba recalls the experience with excitement, but acknowledges that it was an experience that required hard dedication, despite injury or nerves.

“I was so scared I was going to stutter through everything because I usually have a very pronounced stutter when I get manic or nervous. I felt nervous during the talent part. I pulled my hamstring that previous Thursday. It hurt so bad and I had to re-choreograph everything backstage,” Asagba said. “It was so stressful. I was vibrating, my heart was like a hummingbird. By the end I was very happy and proud to know that I’d done all I could. There was a lot of mental battling, and trying to understand that I did the very best that I could with what I had, and that’s something that I should be proud of. Overall, it was a good experience on stage.”

For the platform portion, Asagba shared her personal journey with ADHD and related ways that individuals could gain insight with not only themselves but also in the way they interact with others.

“I was looking at different things. I didn’t want it to be about me purely. I chose [to focus on ADHD] because more people should be educated about it, because it’s not just people not being able to listen, and it’s more than being a little fidgety in class,” Asagba said. “It affects your sleep. People with ADHD are more likely to have their marriages end in divorce. It’s heavy. It affects your relationships and your decision making skills. It becomes difficult to prioritize, and it affects the way we see time. People don’t know that because they think it’s a lot more simple than it really is.”

To Asagba, diversity is the key to understanding and appreciating the value in others, as well as the answer to fostering an increasingly thriving educational community.

“It is so frustrating to watch your brain work in a way that you can’t control, and it feels so trivial, that you feel like you should be in control. But in reality, it’s nothing you can control. It’s how your brain functions, it’s how you’re wired at the very core. It is so revolutionary to realize there is nothing wrong with you. We need to be more patient with people because I promise they are ten times more frustrated than you are,” Asagba said. “I genuinely believe that treating things with kindness and respect would literally flip society on its head. Even if it wasn’t to highlight ADHD, it’s to highlight the fact that we all function differently cognitively and we need a more diverse school system for us to flourish.”

At the end, Asagba is proud to have served with the other candidates in promoting an environment of greater awareness, friendship, and perseverance.

“This is way more than a competition. It’s not just frilly dresses and ruffles. When you are chosen to hold a title, it’s the most rewarding thing. It is the most wholesome and fun-growth experience that I’ve had on this campus. It was fulfilling. Everyone I talked to was so kind and so loving, and they want to see you succeed. They want to watch you do well,” Asagba said. “You are more capable than you think you are. You are a lot smarter and stronger than you think you are. The only limitation you have is your personal mindset.”