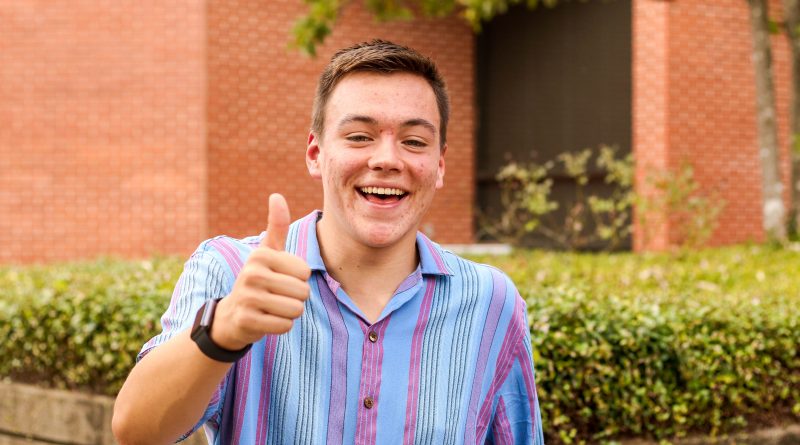 It takes a special charisma to convince a few hundred strangers you are the right man to lead them. Freshman Class President Kallen Smith accomplished such a feat within his first few days at Ouachita.

Smith previously served three years as a representative of his class and one year as the student government president at his high school in Jonesboro, Arkansas. He described these roles as one of a “classy hype-man.”

“I hype up people while being more regal in government,” Smith said. “I like being a team leader and representing people.”

He uses his voice for the betterment of those he serves. His love for people ultimately drives his interest in the Student Senate position. Smith desires to serve his peers and community in a number of ways.

Smith hopes to spend this year finding a campus ministry to plug into. He also wants to give of himself in the children’s or kid’s ministry at a local church during his time at Ouachita. Service characterizes each of Smith’s passions.

Smith is pursuing a degree in Biomedical Sciences with the ultimate goal of becoming a pediatrician unless the Lord directs him otherwise. Though this program poses academic challenge, Smith feels well prepared by his high-school academics. He is thrilled to pursue his passion for medicine with an aim to combine it with his love for serving children.

As a Biomedical Sciences major, Smith must travel abroad for a summer or semester study program. His pre-existing love for seeing new places excites him toward this requirement. He holds a higher interest in Spain and South Africa but looks forward to whatever comes. Smith says his love for traveling originates with his family.

“My dad and I take a road trip together every other year,” Smith said.

He enjoys the freedom to explore brought about by being at college. He plans to take numerous adventures with his newfound friends.

Though he did not know anyone from his home town coming to Ouachita, he has not been intimidated because he loves to meet new people and mingle with strangers to make them friends. Socializing comes easily to Smith, a self-proclaimed “people-person.”

“I feel most comfortable when other people are around,” Smith said.

Coming to college opened the doors to meeting hundreds of new people. Participating in Tiger Tunes has also brought about an opportunity to build relationships with people he otherwise would not have encountered.

After participating in an event much like Tiger Tunes in his hometown, Smith looks forward to taking on a collegiate-level performance. His competitive nature and high energy will no doubt show up on the JPAC stage.

Smith’s friendliness, dedication, ambition, love for people, reliability and love of service make him an ideal camp counselor. He poured himself into such a role at Brookhill Ranch Camp in Hot Springs this summer.

Smith first attended Brookhill as a camper in the third grade, following in his mother’s footsteps. After participating as a camper for as many years as the camp allowed and serving two years as a junior counselor, Smith worked as a full-summer assistant counselor.

During his summers as a camper, Smith felt positively impacted by his counselors. Their intentionality and positive influence built a desire in him to pour himself out to younger students. He believes God will lead him back to Brookhill for at least one more summer to continue.

“It taught me how to have fun as a Christian,” Smith said.

Smith taught lake sports he already enjoyed such as kayaking, canoeing and paddle boarding. Summers at the lake with his family prepared him well for such a position. He also learned a new set of skills working the sound board for the worship services.

“I get to orchestrate this moment for these kids to have, and the Lord is using me through that,” Smith said.

Spending the summer working sound taught him how to quickly change pace and helped him focus on one thing at a time. It also increased his admiration of and appreciation for those who run sound.

Smith, who decided upon Ouachita after visiting, is grateful for the opportunities here.

As freshmen class president, Smith will be the chair of Student Senate’s public relations committee. In this role, he will have the communicate all the ways Student Senate serves students on campus.

As well as his Senate responsibilities, Smith will be enjoying all that Ouachita has to offer.

Smith even enjoys eating in the cafeteria. He believes he will not grow tired of the meal choices because of the incredible variety.

Along with food, Smith also obsesses over Pixar movies. He places “Incredibles” in the number one spot. Its mix of family-friendly and superhero story bring it to the top.

“I could talk about ‘Incredibles’ all day,” Smith said.

Even in the small things, Smith allows passion to drive his actions.