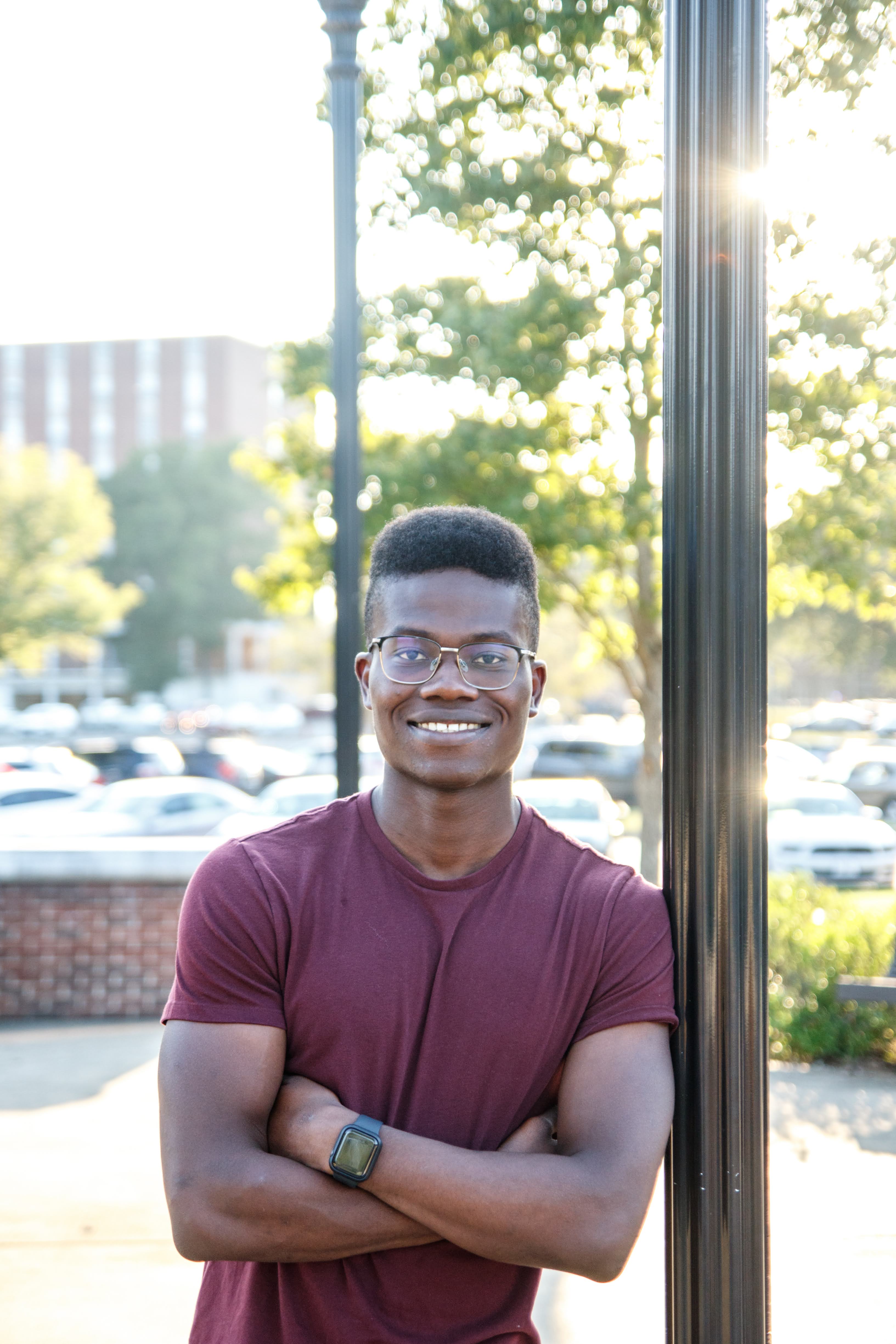 For Ben Olatunji, coming to America was something of a dream.

Olatunji is a junior international transfer student from Northwest Arkansas. His story, however, begins 6,546 miles away, an ocean apart from Arkansas. Olatunji is from Nigeria, Africa. He grew up moving around the continent as his parents were missionaries.

“It’s never easy to pinpoint one place that I’m from, but I was born in Malawi, raised in Mozambique and Kenya, but I only have Nigerian citizenship. The simple answer I give is that I am from Nigeria, but most of my life has been spent elsewhere,” Olatunji said.

In the 6th grade, Olatunji and his siblings began attending Rift Valley Academy in Kenya. It was here that he was introduced and exposed to American culture. This education would benefit him in the years to come.

“The boarding school I went to was an American school. For the most part, I was already used to American culture,” Olatunji said.

In 2020, God began to open doors for Olatunji to attend an American college. In perfect timing, he moved to Northwest Arkansas right before COVID-19 stopped international travel. This once far-fetched dream now became his reality.

“My time as an international student began in Northwest Arkansas where I lived with Andrew and Bethany Marshall, a couple that opened their home to me while I attended community college,” said Olatunji. “I didn’t really know what to expect coming to the U.S. for the first time, but I’m thankful that the Marshalls made me a part of their family and helped me settle into life here.”

Olatunji met his host family, the Marshalls, through connections his parents had at First Baptist Church of Rogers. They asked a church member if there would be a family in the congregation interested in hosting Olatunji as an international student. The Marshalls expressed their interest and a few months later Olatunji landed in Arkansas and enrolled at Northwest Arkansas Community College.

As his two years at community college were quickly coming to an end, the Marshalls advised Olatunji to tour Ouachita. As alumni of OBU, they talked highly of the school. Olatunji took a chance and scheduled a tour.

“There were several things that drew me to OBU, one of the main things was the admissions process. Throughout it, I felt like the people I interacted with genuinely cared and wanted me to come here which was appealing. I also liked that it was a smaller campus which would allow me to know my professors better. Being an accounting major, I learned that the business department here was very good which made it a great fit for me,” Olatunji said. “Another factor was being able to afford coming here, this played a major role in my decision. I was able to get some scholarships and further support which allowed me to attend Ouachita.”

As Olatunji settles into life at Ouachita, he is most surprised by the campus’ interconnectedness.

“The first couple months have been good, they’ve gone by quickly. One thing that has surprised me is how interconnected people at Ouachita are. Though it’s a small school, it seems to be influential. I’m looking forward to the opportunities and people that I’ll meet.” Attending college at Ouachita has proved to be quite different from the two years Olatunji spent attending community college. Transitioning from a nearly all online experience to in-person one is an opportunity Olatunji has embraced.

“OBU has been completely different from my other school,” Olatunji said. “Because of COVID, most of the classes at my other college were online, so I am so glad to finally have classes in person and have the opportunity to meet new people and make new friends. I’ve been looking forward to intramurals too, especially soccer, which my other school didn’t have and so far, it’s been a lot of fun.”

Over the next two years, Olatunji has several goals he seeks to accomplish. Between academic and personal goals, he is set to experience much growth while at Ouachita.

“One of my main goals is to be successful academically during the two years that I’ll be here. However, I am also hoping to grow personally in several different aspects to prepare myself for life after Ouachita. I also hope to make an impact, however large or small, during my time here,” Olatunji said.

Olatunji hopes that he can make an impact at Ouachita by sharing his testimony of how God provided opportunities and used people in his journey so far.

“I hope people can learn from the way God has really worked and made things work for me. Being a missionary kid, options weren’t necessarily limited, but my parents didn’t earn a salary,” Olatunji said. “I wasn’t sure where I would end up going to pursue my university education. I hope others can learn to not limit their aspirations because God can use people to open doors that you could never even imagine. I didn’t think I would end up here, but I’m grateful that I did and I’m looking forward to the next two years that I have at Ouachita.”