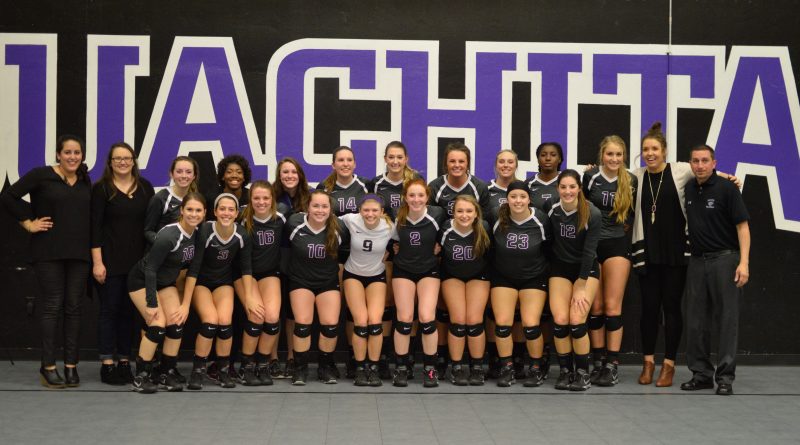 The Ouachita Tigers’ volleyball team defeated Arkansas Tech in three straight sets (26-24, 25-11, 25-19) on Thursday night to clinch their share of the 2016 Great American Conference regular season title, their first ever conference title under head coach Danny Prescott. It was the fifth straight win for Ouachita, who finish the regular season with a conference-high 22 wins. Junior Kori Bullard led the Tigers with 10 kills and six blocks. As a team, Ouachita finished the match with a .342 attack percentage browse around this website.

Arkansas Tech jumped out to a commanding lead in set one, forcing Ouachita to take an early timeout down 6-1. Down 14-6 in the set, the Tigers got a kill from Katie Camp to start their comeback. Behind the service of senior Ashley Wake, the Tigers cut the Golden Suns’ lead to four. Back-to-back blocks by Kori Bullard and Stormi Leonard made it 14-10. After a Tech kill halted the rally, Ouachita got the serve right back thanks to another kill from Camp. She then held serve for four straight points to tie the set at 15-15. The two teams exchanged leads until Tech gained a two-point advantage and forcing another Ouachita timeout. Trailing 21-19, the Tigers again rallied to lock the game up at 24-24. The Tigers scored two straight with the set point coming off a kill from senior Jayme Shell.

Set two was dominated by Ouachita, winning it 25-11. Arkansas Tech was forced to take a timeout down 12-6 and then again in the second set after the Tigers extended the lead to 16-6. Camp held serve for six straight points during the Tigers’ run. Senior Anna LeTourneau would pick up one of her two service aces of the night in the second set. Ouachita would hit .353 in the second set, committing only two attack errors to Tech’s 10. Shell led the way with three kills in set two. Junior Caitlin Cantrell came up big defensively, getting three blocks in the set.

Ouachita never trailed in set three, taking the final set 25-19. Ouachita was able to take advantage of Tech’s seven service errors and hit .294 in the finale with Bullard and Tabatha Huckabee leading the Tigers with two kills each in the set. Back-to-back errors by Tech would give Ouachita the set and the match and a share of the GAC regular-season championship. After the match, the team recognized their four seniors Emily Alderson, Anna LeTourneau, Jayme Shell and Ashley Wake.

The win also secures the second seed in the GAC Tournament for the Tigers. They will face the seventh-seeded University of Arkansas-Monticello in the quarterfinals.

Make sure to congratulate the team members if you see them around campus!