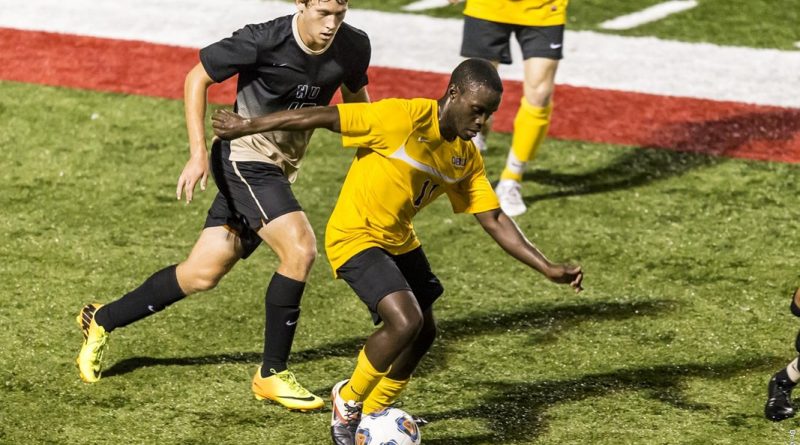 Ouachita’s Men’s Soccer team fell to Harding on Friday 2-0 in the semifinals of the GAC tournament at Shawnee, Oklahoma, ending what was a promising season. The Tigers were the 2 seed entering the tournament after finishing the regular season 10-7. Harding went on to defeat Oklahoma Baptist on Sunday, becoming GAC champions.

OBU began the season 4-1 before losing six of their next seven. After falling to 5-7, the Tigers were able to finish off the season with five straight wins to clinch that 10-7 record, their best since 2010. “It got a little shaky towards the middle but we finished strong,” junior, Tinashe Chigede, said.

Head Coach, Wilson Jones, has led the squad after being hired in 2015. Once a volunteer coach under Kevin Wright in 2012, Jones played a role in recruiting the starters that are currently on the team.

Jones’ first season as head coach was far from a failure. Although Ouachita finished the season with a losing record of 7-10-1, it was enough to earn the team 1 seed in the tournament. After outscoring their opponents 10-0 over two games in the GAC tournament, the Tigers came out on top as conference champions. Jones was later named GAC coach of the year.

“Winning conference last year gave our group a bunch of confidence coming into the season,” Chigede said. “We felt like we can compete with the anyone and this year really showed that we’re a quality team.”

“Throughout the NCAA, not many teams can say they hosted and won the conference tournament,” Chigede added. “So that was a special time for the guys. At the start of the year, our goal was to win a conference championship. And we did that.”

Coach Jones tried to pinpoint where the recent success of the program has come from. “I think the improvements to our facilities that have happened each year for the past 4 years certainly helps with recruiting,” Jones said. “I have always thought that Ouachita would sell itself if we could get recruits on campus. That remains true, but improvements in facilities certainly helps that.”

Recruiting turned out to be more than helpful this fall, with three of the four freshman signed in February—Hector Duron and twins Noa and Jakob Cuellar—being leaders in overall minutes played over the course of the season.

Other Tigers played into their roles this season, as well. Chigede led the team in goals (6) for the third year in a row and also led the conference in game-winning goals.

“It’s nice to get individual recognition, but honestly, I could not do it without the rest of the guys,” Chigede said. “They push me in practice to be the best version of myself and they make my job of scoring goals a lot easier. My teammates deserve the most credit for putting me in great situations.”

Chigede also recognized the importance of the work put in before season officially began. “Coach Jones prepared us well with a great summer workout plan to help get in shape and a difficult, but successful, pre-season training. Most of the game is based on mental toughness and preparation, and I feel like he instilled that in us from the beginning.”

In the end, it is the team’s hard work and collaboration that set them up for the win. “We tell the guys that each game someone has to step up and put the team on their shoulders. Numerous guys have done that throughout the year and it’s usually someone different each time. To us, the emphasis is put on the success of the team, not the individual. It doesn’t matter who gets the job done so long as it gets done.”

While the Tigers fell two games short of a conference championship this season, a 10-7 record is nothing to be down about, as a winning record was not even something they could muster during their conference championship run last season. While the Tigers are losing key seniors like Logan Hampton and Brandon Hom, eight of the ten minutes leaders for 2016 were non-seniors. Barring any key freshman signees, this will give Ouachita an even more experienced core roster next season.