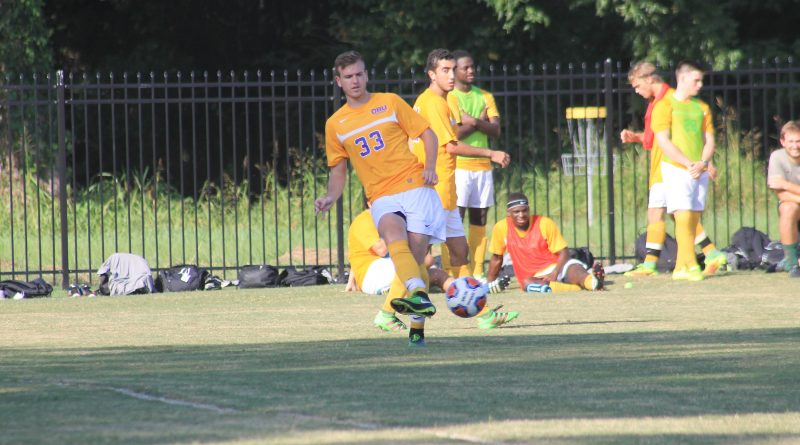 For many athletes, their sport is crucial to them, and when they play they feel free and natural. This is certainly true for Matt Wallak, a sophomore kinesiology and leisure studies major from Fort Worth, Texas. Wallace began playing soccer at a young age, and now you can see him any given game day wearing a Ouachita Tigers men’s soccer jersey.

Wallak grew up interested in sports, and by the time he was three, he was playing soccer.

“I started in a local rec league,” Wallak said. His parents wanted him to get involved early.

For Matt, a lot of his soccer career has come from connections he made through friends and experiences playing soccer, and this started early for him, around age nine.

“One of my friends from my rec league told me he was going to try out for this competitive club team, and when he asked if I wanted to try out to, I joined in,” Wallack said.

This was the first competitive soccer experience Wallak would gain, and he would play in competitive leagues up until he came to Ouachita.

While attending Fossil Ridge High School in Fort Worth, Texas, Wallak played in both a high school league and on a competitive club, while also juggling coursework and friendships, already enough of a struggle for the average student.

There certainly was a difference between competitive club play and high school team play.

“When you play in club, everybody is there with a purpose to get better and win. It’s very competitive, and everyone is competing with each other for starting spots. In high school, there is a little bit of that, but there are also guys who are out there playing for fun,” Wallak said.

Wallak’s path to Ouachita is unique, as he knew he wanted to major in kinesiology and attend a school where he would receive a quality education.

“I was thinking about playing college soccer, it was what I had always wanted to. It was my goal. I was also trying find a school that had my degree I was looking for,” Wallak said.

After the process of weeding out schools and a visit to Ouachita’s campus, Wallak said, “I was like, ‘wow, this feels like home, and I like the coaching staff, the school is great and everything,’ and I made the decision to come here.”

His first practice was nerve-wracking.

“You don’t know what to expect coming into the next level,” Wallak said.

He began questioning his effort over the years to prepare himself for that moment. Wallak caught on early, however, and after the first few training sessions, he began to feel confident in his abilities. His teammates have become crucial to his experience.

“On and off the field, those guys are my brothers, they have my back all the time, when you’re going through several hours of training everyday, you grow a lot,” Wallak said.

Wallak hopes to keep the relationships with his teammates and coaches for the future.

While many players have favorite positions on the field that play to their strengths, throughout his career thus far, Wallak has played all around the field.

“I got recruited to come here as a defender, but when I was younger, I was always an attacking player. Then, as I matured, I slowly got moved farther back. I started out as a forward, then got moved into midfield and then going into college I became a defender, so I’ve played pretty much everywhere except goalie,” said Wallak.

This versatility on the part of Wallak must have been an advantage in the eyes of the coaches recruiting him, and it certainly helped his career.

After he leaves college, Wallak has no doubt he will continue playing.

“I love the sport of soccer, I don’t know what I’d do without it. The thought of me having only two more years of competitive playing after this is crazy,” Wallak said.

Wallak, like most of us, is unsure of the details of his future after he graduates here, but he knows he will continue to play soccer, fostering friendships and relationships to last a lifetime.

Wallak says he wouldn’t be where he is today without familial support.

“My dad has always been my biggest supporter. We’re always talking about soccer or playing FIFA or whatever,” Wallack said.

Be sure to keep an eye out for Matt Wallak this soccer season on the men’s soccer team.