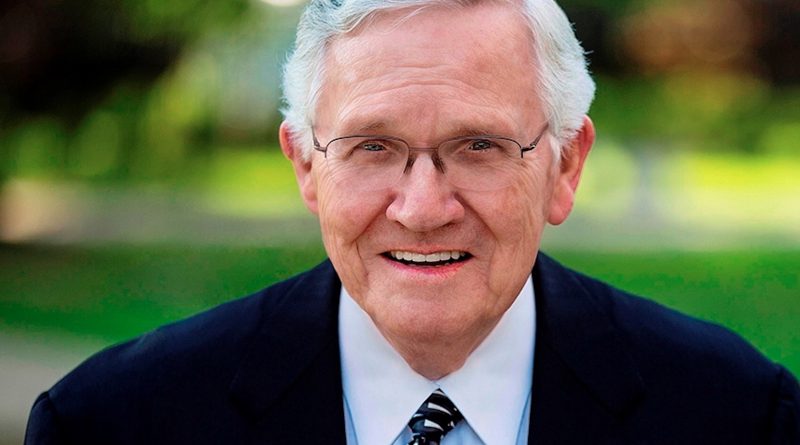 ARKADELPHIA, Ark.—Dr. Ben M. Elrod, former president and longtime chancellor of Ouachita Baptist University, passed away Aug. 7 at age 87. He is remembered for a lasting legacy of leadership and service at Ouachita during his decade as president and beyond.

Dr. Elrod served as Ouachita’s 13th president from 1988 to 1998. A 1952 graduate of Ouachita, he also served as a member of the Board of Trustees and as vice president for development. He was named chancellor following his retirement as president.

According to Dr. Dan Grant, Elrod’s predecessor and longtime colleague and friend, “When Ouachita asked me to serve as president, my first call was to Ben Elrod. I asked him to serve as chief fundraiser for Ouachita, and his acceptance began a lifetime partnership and friendship.

Among his many leadership accomplishments, Dr. Elrod led the university in raising $57 million during Phases I and II of Ouachita’s Decade of Progress Campaign. Signature achievements during his tenure included the construction of the university’s landmark Jones Performing Arts Center in 1992 and Harvey Jones Science Center in 1997.

“I met Dr. Elrod during my first week as president,” recalled Ouachita President Ben Sells. “He and Betty Lou hosted me in their home. Sharing some of her famous chocolate pie, they told me their Ouachita story. I asked him for advice that afternoon, and I have not forgotten his counsel. Just a few weeks ago, I was in his home, learning more Ouachita history, and I always left encouraged.

“Dr. Elrod was Ouachita’s first true vice president for development, and the university continues to benefit from the work he inaugurated in the 1960s,” Dr. Sells added. “I believe the legacy of a college president becomes more evident with the passing of time. The longer I’m at Ouachita, the clearer it is that Ben Elrod’s impact is significant and enduring.”

In recognition of Dr. Elrod’s lifelong commitment to servant leadership, volunteerism and community service, the Board of Trustees named Ouachita’s Ben M. Elrod Center for Family and Community in his honor upon his retirement as president. He was further honored with the dedication of a new Elrod Center facility in 2015.

Dr. and Mrs. Elrod also were honored by the university community in 2009 with the dedication of Ben and Betty Elrod Boulevard, which was designed as the main entrance to campus from Highway 7.

“I am so proud that we have named the boulevard in honor of Dr. Ben and Betty Lou Elrod,” Dr. Rex Horne, Ouachita’s 15th president, said during the dedication service. “No one loves Ouachita more. Their lives of service and devotion to Ouachita are exemplary.”

In a 2011 essay published in Ouachita Voices: Celebrating 125 Years of Academic and Christian Excellence, Dr. Elrod wrote that his vision as president was “to inform, mobilize and solicit the involvement of the larger Ouachita constituency in a one-decade effort to move the institution to a new level of capability, excellence, reputation and effectiveness in the world of higher education,” adding that “all of that would be devoted to the development of a ‘university under the Lordship of Christ.’”

Looking to the future, Dr. Elrod declared, “An institution such as Ouachita is a living entity, created afresh by each generation. … It is exciting to view a new Ouachita being built on the foundation of the past. The future of Ouachita will be, no doubt, beyond our most ambitious dreams.”

“Dr. Ben Elrod was a multi-faceted leader,” reflected Ian Cosh, vice president for community and international engagement and director of the Elrod Center.

Noting that “the Elrod Center for Family and Community that coordinates service at Ouachita perfectly reflects the passion of his life,” Cosh said, “He believed in the power of experiential learning and wanted Ouachita to be known as a university committed to learning that starts in the classroom and moves beyond it to meet the needs of a hurting world.

“My hope is that future generations of Ouachitonians will follow his example by using their education and their skills to bless others and be the servant leaders that he showed himself to be in word and in deed,” he added.

Cosh and fellow Ouachita alumnus Rex Nelson published a 2016 biography of Dr. Elrod titled Giving Until It Feels Good – Ben M. Elrod: Arkansas Educator and Fundraiser. The biography describes Dr. Elrod as “one of Arkansas’ most respected leaders in the 20th century,” emphasizing that “Ouachita and the state of Arkansas are better places because he walked among us.”

“Ben Elrod is one of the men I respect most in life,” said Nelson, senior editor of the Arkansas Democrat-Gazette. “It’s important that we record the story of Ben Elrod for those who come later. His legacy will live on in this state for decades to come.”

Dr. Elrod, an ordained minister, served as pastor of churches in Arkansas, Texas and Oklahoma as well as president of Oakland City College in Indiana, Georgetown College in Kentucky and Arkansas’ Independent Colleges and Universities. He also served as president of the Association of Southern Baptist Colleges and Schools, which named him the 1997-98 Outstanding Christian Educator, chairman of the Cooperative Services International Education Consortium and president of the Arkadelphia Rotary Club. He served on numerous boards and commissions, including the Arkansas Economic Development Commission, Arkansas State Chamber of Commerce and Arkadelphia Chamber of Commerce.